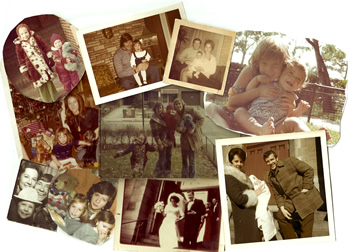 Ever since she was a little girl, the creation of Choose a Family has been growing inside of Kim Parshley’s heart. After the passing of her father, when she was just thirteen years old, overwhelming sadness settled in from not having her dad around anymore. She would see other people with their fathers, and this produced feelings of loss, envy, and an insatiable desire for that love and support that she needed.

Now, all alone, her mother juggled work, two kids, private schools, extracurricular activities, etc… Then, her mom was diagnosed with lupus, as well as many other ailments. The doctors were always delivering bad news. If that didn’t hurt enough, her mother battled with the disease of alcoholism. She was a precious loving soul, but was crippled spiritually, mentally and physically with the addiction along with the heartache from losing her husband and raising two kids alone. She used alcohol to self-medicate which prevented her from ever having a true healthy relationship with her children.

Kim spent over a decade taking care of her mom, doing the very best that she could. She longed for that safe and sound relationship she remembered having with her parents back when she was just thirteen years old. She also witnessed her grandmother in and out of state institutions due to mental illness. There was a chain reaction of unavailable parents in Kim’s family. The loneliness felt like a constant daily challenge.

Then, in 2007, her mom died of lung cancer. The tragedy of her mom’s passing left an empty space in her heart. Her mother was her best friend. She never felt more alone.

Kim began to suffer with bouts of anxiety which lead to panic attacks and eventually agoraphobia. At times, she couldn’t even find the courage to leave the house. She disconnected herself from society for quite a while. Precious years of her life were just slipping away. Holidays were not the same anymore, but in addition to all of that, she missed the little things, like family dinner at the table. With nobody to turn to, few aunts and uncles nearby, no grandparents, no boyfriend or husband, she began to dream.

With the strength and courage that her parents had instilled in her, she slowly began to overcome her fears and anxiety. She delved into work so she could save enough money to buy a house one day so that she could feel a sense of home. However, her career in real estate was a commission-based salary and Kim was always afraid that the next sale wouldn’t come in. While at work, she would be out showing houses and would see families enjoying time together playing games, barbecuing, swimming in the backyard or sitting together while having supper. Each home had its own “life” going on while she was working, with nothing and nobody to go home to.

Each day she would meet new and interesting people, some of whom she would imagine taking the place of her loved ones who had passed on. In her mind, Kim would imagine if they would be a good match to replace her mother, father, grandfather, grandmother, etc. Jeanette, her mom’s best childhood friend, helped Kim heal from the loss of her mother and gave Kim inspiration to continue being a strong woman despite all of her losses. This support led Kim to realize the value in familial connections, even if those connections are with others who are not of blood relation.

This inspired Kim to think; what if she and her sister didn’t have to be alone for the holidays? Wouldn’t it be great to be able to just walk into one of those many houses filled with life and ask them if they could adopt her? But she never found the courage to do that, especially as an adult. “So,” she thought, “What if I can be the buffer in-between someone who wants to be adopted and someone who is looking for someone to adopt? And what if we can do all of this without the legal papers?” She imagined what it would be like to find a substitute family member this way.

Kim imagined the benefit of helping others. Perhaps help a mother find a daughter, a grandfather find a grandson, an only child find a sister, and young or older adults find a dad or a mom. She’d watch talk shows where elderly people didn’t have anybody to visit them at their nursing homes or bring them home for the holidays, or parents who lost children. Making friends or finding mentors as an adult is very difficult, so she wanted to help make it easier for people in search of them.

More and more she thought about it. “These everlasting relationships are what make the world go round. If I can be the catalyst for that change, which can bring harmony, love, hope and support along with the feeling of security and a sense of ‘home’ to anyone, I’d like to do that. This could open doors and change the world like no other social networking site has done before!”

Register on Choose a Family now and find your Family Figures

Choose A Family makes it easy to fill that empty space in your life and in your heart. Finding these connections is just a click away.